Sandrine strikes in Albany for Probert and Balding 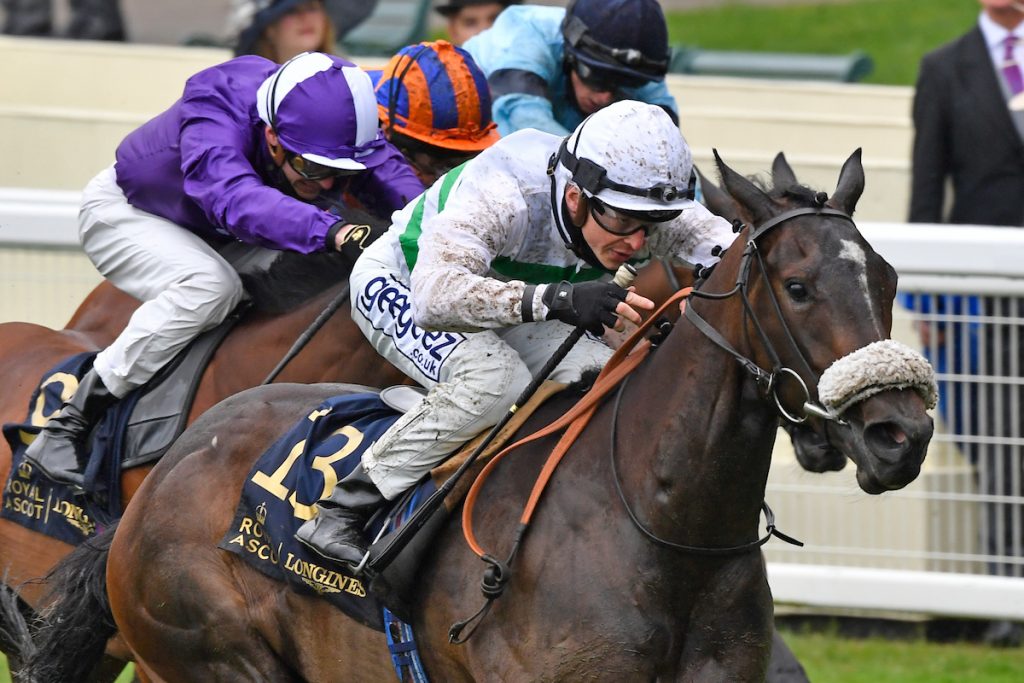 After a lunchtime inspection, day four of Royal Ascot was able to go ahead as planned, and it was the 16/1 chance Sandrine who took the opening G3 Albany Stakes for two-year-old fillies.

On the rain-softened ground over six furlongs, staying power was likely to come to the fore, and so it proved as Sandrine finished best of all to defeat Hello You (5/1) by a length and a half. Oscula (10/1), one of two fillies to take their chances on the stands’ side, was rewarded with third spot, a further half-length behind.

Sandrine was ridden by David Probert, who was registering a second Royal Ascot success and a first since 2014.  Trainer Andrew Balding was saddling his second two-year-old winner of the week, following the victory of Berkshire Shadow in Tuesday’s G2 Coventry Stakes.

Sandrine’s owner-breeder Kirsten Rausing said: “I bought this filly’s fifth or sixth dam as a yearling at Goffs in 1976 and the family has been with me ever since. Everything on her catalogue page from top to bottom, we have bred at Lanwades Stud.

“All my animals are homebred, so it gives me tremendous pleasure to keep the continuity. I also tend to support my own stallions, and this filly is Bobby’s Kitten’s first Stakes winner, first Group winner, so we are thrilled with that.”

Balding said: “I thought the meeting was sure to be off. We were only coming here to have lunch. I am so pleased for Kirsten, and she deserves a winner like this.

“Sandrine was impressive when winning on debut. It was a low-class race at Kempton, but the form worked out well and she worked nicely last week. We felt we were entitled to run. We were slightly worried about the ground as there were mixed messages on the pedigree.

“However, Bobby’s Kitten won well on soft ground on his only start in Ireland. There was no fluke about the win she was very impressive.

“I rang Kirsten a week ago and said ‘look, she’s worked so well, we are going to have to make an entry to the Albany’ And Kirsten, thankfully, was up for it.

“I am pleased for David Probert, who just gave her the most beautiful ride and really deserves it.”

Probert said: “A massive thank you to Kirsten Rausing for keeping me on this filly. She won so well on her first time out around Kempton and we knew she was pretty special, but she has done so well to brave it through this ground.

“Going to the start, I didn’t think many would go in these conditions, but Sandrine is super-fit and very hardy. I think she has a great attribute – she relaxes very well and gets into a good rhythm. She’s not very green for an inexperienced filly, and she’s taken me past the two [furlong-pole] almost filling herself up again, so when I did ask her, she really was relentless and galloped really nicely to the line.

He added: “There’s a lot of competition in that weighing room. Oisin is going up through the ranks with Andrew and there’s plenty of other jockeys she could have chosen from. I’m just massively thankful for all the opportunities I’m given, and when I do get given them, I just have to take them with both hands and hope for the best.

“Kirsten has been an avid supporter of mine and I hae been lucky to ride a few winners for her this week at various tracks, so for me to get a Royal Ascot winner for her is very special.”

Click here for an audio interview with Andrew Balding and David Probert: