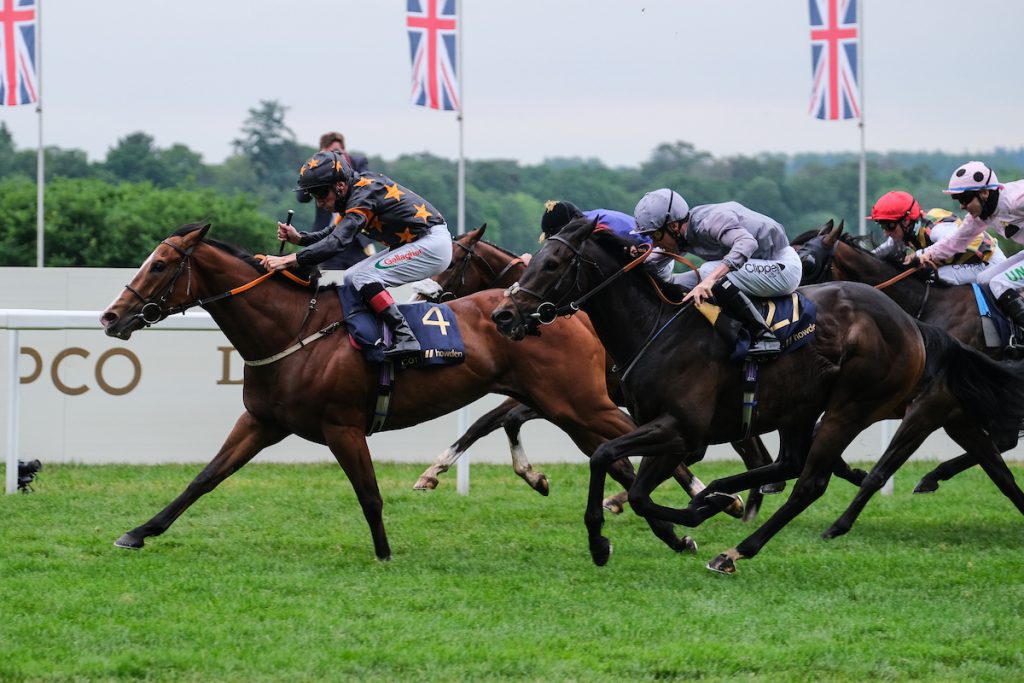 In a week of Royal Ascot firsts, it was Jockey Shane Kelly and trainer David Evans’ turn, with Rohaan striking in the six-furlong Wokingham Handicap.

The only three-year-old in this ultra-competitive handicap, the 112-rated Rohaan (8/1) continued his superb season with an authoritative performance to score by a neck from Fresh (15/2).

The Queen’s Kings Lynn was a well supported 3/1 favourite but was another near miss for Her Majesty, finishing third beaten a further half length. Chiefofchiefs (14/1) was three-quarters of a length behind the Royal runner in fourth.

Rohaan had beaten Dragon Symbol – disqualified from first place in Friday’s G1 Commonwealth Cup – on his previous start in the G2 Sandy Lane Stakes at Haydock Park in May.

Evans said: “It feels a lot different having a Royal Ascot winner – it’s a great feeling. I don’t know what to say really.

“I couldn’t really see the race. I was watching the big screen and couldn’t see a thing. I saw his white face early on and could see he was on the back of the bunch, but couldn’t see anything later on until about the last 100 yards.

“Rohaan is a serious horse – it would have been nice if he could have run yesterday in the Commonwealth Cup, but it’s lovely to win this race. I was always confident, but you never know what the field is going to do during the race.

“I think we will have a look at the July Cup next.”

Kelly said: “I am overdue, and probably should have had one [a Royal Ascot winner] before now, but that’s history. It was a great performance from the horse, he’s an incredible horse. He goes on any ground but handles this particularly well.

“I am delighted for the horse’s new owner [Chris Kiely], and for David Evans. It’s a remarkable story and I had the easy part. The rest is history.

“That’s Rohaan’s style of running – when Ryan Moore won on him here, he did that; he’s just lazy early. I was worried a little early doors, just that he wasn’t taking any interest and I had to squeeze him a bit, then he came back on the bridle and obviously the further he went, the better he was.

“He just comes alive when you need him and slices through them; he just picks them up so easily. He gets through soft ground like it’s good ground, and it’s hard work – it’s tacky, gluey, but he slides through it like it’s good, fast ground.

“This has got to be right up there [with his best wins] – I know it’s only a handicap, but it is Royal Ascot. I’ve had a few near-misses, probably should have had a winner before now, but that’s history and it’s about today, and fair play to all connections.”