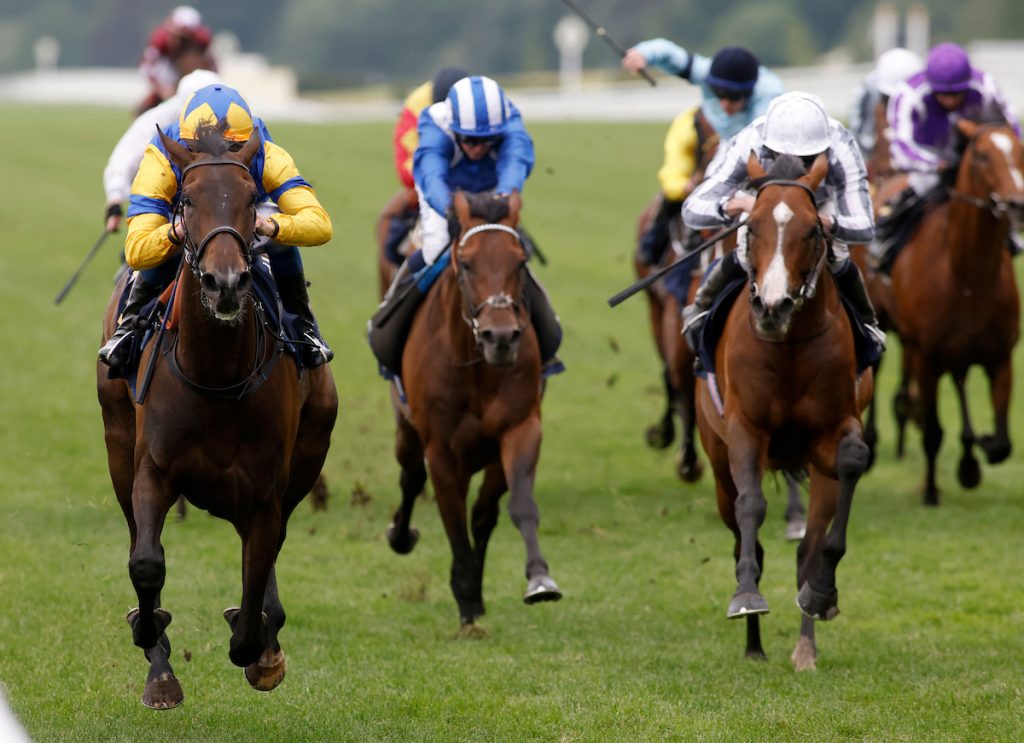 Wonderful Tonight gave trainer David Menuisier a first Royal Ascot success when beating the boys in the G2 Hardwicke Stakes over a mile and a half.

The four-year-old filly was making her seasonal debut after winning the G1 QIPCO British Champions Fillies & Mares Stakes at Ascot on her final start in 2020.

Racing keenly early on, jockey William Buick eventually got Wonderful Tonight (5/1) settled behind the leaders before kicking clear in the straight for an impressive length and a half success over 9/4 favourite Broome. Hukum (8/1) was the same distance again back in third.

Menuisier said: “Wonderful Tonight is an absolute champion. I couldn’t be bullish in the press before the race because she was always going to improve for the run.

“She was running against tough opposition with the benefit of at least one run, so you always have to be on the side of caution, but she is amazing. I didn’t know what to say in the last 50 yards, it gave me a great sense of pride.

“Wonderful Tonight showed a tremendous turn of foot which she perhaps never showed before. I am very proud of the team, proud of the filly and also proud it is the only day Her Majesty came to this week, so I’m pleased she got to see this filly live.

“The fact that she handles soft/heavy ground so well compensated for the lack of fitness today. Can I go as far to say she will show the same traits on good ground? I don’t know. Perhaps we will try in the Prix de l’Arc de Triomphe if the ground happened to be good. Would we try her on good ground before that? I don’t know. She loves Longchamp and Ascot so we will keep an eye on all the races she can run it at both venues.

“The King George was run on very soft ground last year. The Hardwicke was not the plan until last week and at the confirmation stage I saw that there was rain forecast and we decided to keep her in. Sometimes you need to be lucky as well!

Speaking about what a first Royal Ascot win means, he added: “It means the world because you carry it like a monkey on your back until it happens. I am absolutely thrilled.”

“I wasn’t expecting her to win, the trainer had managed my expectations and he had also managed the expectations of the entire punting public in the Racing Post by saying that she was at 80/85 per cent fit. Maybe she was, I don’t know, but didn’t she win so well! What a filly she is, that was unbelievable.

“It means everything, actually. There are winners and winners, but a Royal Ascot winner… I’ve won a lot of very good races, but to win at Royal Ascot is like I’ve died and gone to heaven.

“After last year, when we almost ran Wonderful Tonight in the Arc, we thought that we would target the Arc this year. I know that’s like shooting for the moon, and it’s a pretty tough target to aspire to, but that has been the target and her programme has been based round it, so we didn’t want her to start the season too early. We don’t think she’s a filly who will like a mid-season break particularly, so we wanted to start the season and gradually bring her along so she could peak on the first weekend of October. This was step one of that plan.”

Buick is still in the hunt for the Royal Ascot leading jockey title after riding his third winner of the week. He said: “Wonderful Tonight has a lot of stamina. I won the Fillies & Mares on her on Champions Day last year and I rode her like a real stayer because she’d won the Royallieu, the 14-furlong fillies race on Arc weekend, making plenty of use of her.

“She is top-class. She probably does handle this ground well compared to some others, but I thought that performance today against the colts was her best yet. And she showed a turn of foot today that I don’t think she’d shown before. I thought she looked great – David and his team had done a great job with her over the winter and have bided their time.

“She is very versatile tactically. She can make her own running as long as she’s in a good rhythm and doesn’t get chased along too early. She was entitled to be a bit fresh today, first run for a while, but I was very comfortable where I was after a furlong or so. It was a nice smooth race; good performance from her and she’s got it all ahead.”

Click here for an audio interview with David Menuisier: