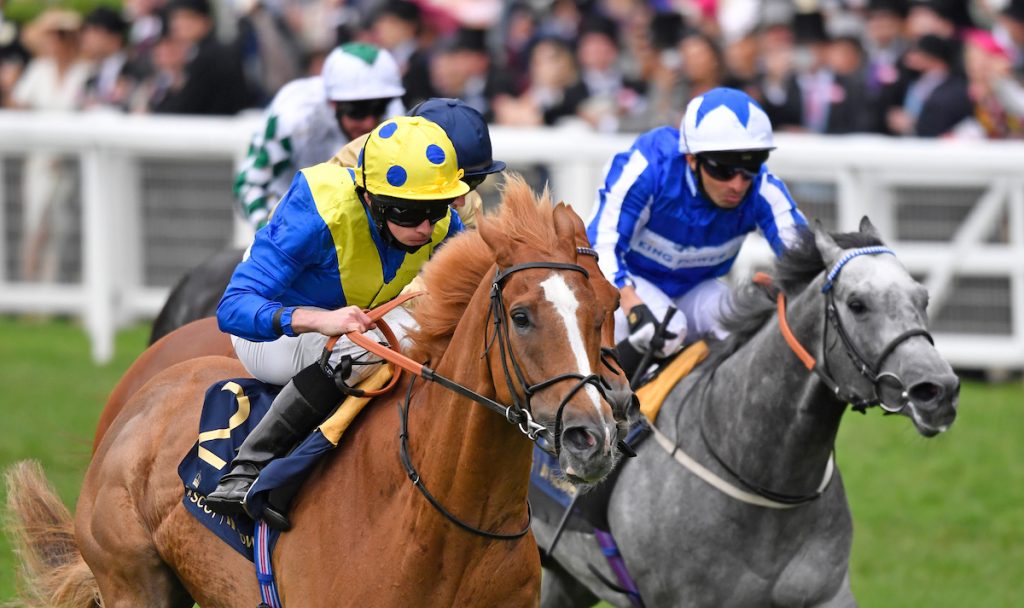 After taking the silver medal in 2019 and 2020, Dream Of Dreams made it third time lucky in the G1 Diamond Jubilee Stakes with a tenacious victory.

The G1 highlight over six furlongs is always an exciting contest and the latest edition was no exception, with seven-year-old Dream Of Dreams (3/1 fav) fighting off the persistent challenge of Glen Shiel (7/1) to prevail by a length. Third home Art Power (7/2) was the one to catch for much of the race, before giving way to the front two.

It was an 82nd Royal Ascot success for Sir Michael Stoute – the meeting’s most successful trainer. Moore was chalking up win number 65 and moved ominously into second place in the leading jockey standings for the week with three wins.

Stoute said: “I am delighted – the horse deserves it. The past two years, he has been beaten a head finishing fastest of all, so I am really thrilled for him.

“He has got more and more relaxed; he doesn’t go to post like a sprinter, does he? I thought he was going to pull up halfway down. He is more relaxed, and a little better. He’s fully developed and strong now. But it’s his mind – he’s really, really chilling.

“He loves a little cut in the ground, but I don’t think he’s run on ground quite as soft as this, so I was a little concerned. Ryan [Moore] had it all planned and it all worked out, and told me what he was doing, so I said, kick on.

“Any winner here is a great thrill, particularly a Group One. But additionally, this fellow has just been touched off twice, so I’m pleased for him – he deserves it.

“I thought I wasn’t going to have a Royal Ascot winner this year – this is the last runner we’ve got. It’s been tough – it’s always been tough, but it’s tougher.

Moore said: “Sir Michael has been great to me throughout my whole career. He has got this horse, who is seven now, to perform here three times in a row and it’s great that he’s able to win today.

“Dream Of Dreams has been a great horse. He has got better every year. A stiff six [furlongs] with cut in the ground, it’s perfect for him.

Archie Watson said of the runner-up: “I am delighted with Glen Shiel. He tries so hard. Hollie said that Ryan came to her late and whilst Glen Shiel kept on battling, she just wished they had come to him earlier as he just keeps on finding.

“He has backed up his Group One win with another solid run in a Group One and we’ll just keep on rolling through these races during the summer.

“It’s very simple with these sprinters. We’ll go to the July Cup next and then he’ll probably have a crack at the Prix Maurice De Gheest – I think the six and a half furlongs will really suit him there. Then you have the Sprint Cup and then back here in October for the Champions Sprint. I might throw something else in along the way. But that will be the gist of it.”

Hollie Doyle said: “It was an unreal run. It’s a bit disappointing not to win, but we know that Glen Shiel is back to his best so early on in the year whereas he didn’t hit top form till the end of last year. We have plenty to look forward to.”

Art Power’s trainer Tim Easterby said: “He has run an absolute blinder. He ran to the line and just got a little tired in the last half-furlong. The other horses were just a bit stronger, and he was out on his own for a long time. He ran a great race and will come on again. The King George at Goodwood is a possible now.”

Click here for an audio interview with Sir Michael Stoute: