Appleby and Godolphin bank a 1-2 in Jersey Stakes 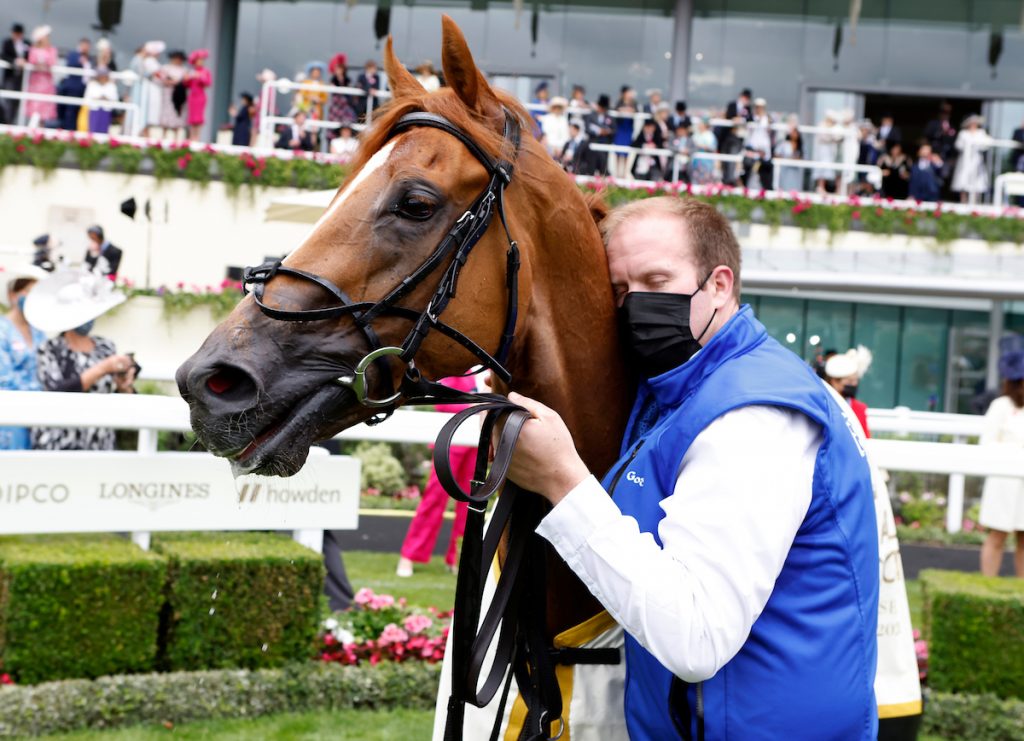 Trainer Charlie Appleby and Godolphin enjoyed a 1-2 in the G3 Jersey Stakes, with Creative Force just getting the better of Naval Crown.

The James Doyle-ridden Creative Force was making it four wins from four starts this season in the seven-furlong contest, beating Naval Crown and William Buick by a length and a quarter. Buick would likely have had the difficult choice between the stablemates, and the betting market couldn’t split them either, with both starting as 5/1 joint-favourites.

Vadream outran her odds of 28/1 by taking third spot, beaten a further three-quarters of a length by the front two.

Appleby was enjoying his second Royal Ascot winner of the week and his 11th in total. He said: “Both horses turned up in great order and full credit to the team. I worked them together probably about 10 days ago and said to Marie [Murphy] and Alex [Merriam], the assistants, ‘we don’t want to be doing that again’ as they are both very genuine horses and it was a stronger piece of work than I ideally wanted. But it just showed their wellness.

“From William’s point of view, he knew when he chose Naval Crown… he said to me ‘Charlie, it is such a hard choice – I’m going to do what I’m going to do and it could tee up quite nicely for Creative Force’. Full credit to everybody, full credit to the lads, they’ve given both of them a great ride and it’s obviously nice to come here and have a 1-2.

“We were hopeful on Creative Force’s pedigree and what he has shown us at home in his attitude – and the way he is finishing out in his gallops and his races – that stepping up to seven furlongs would be within his realm, and he’s gone and duly obliged today.

“James has given him a lovely ride. He knew he had to sit a bit patient on him stepping up over this trip and on this ground, and as James said on his way in, he is a very brave horse. I’m delighted first and foremost for the team – it’s great to get a second winner on the board this week.

“I think we’ll probably look at something like the Prix Maurice de Gheest; drop back half a furlong to six and a half. He’s got bags of pace there, travels well and picks up well, so I think that’ll be a nice race there to suit his profile. Potentially, the likelihood is the same for Naval Crown – they might just have to take each other on again, and see if we can reverse the form.”

Doyle, registering his 17th Royal Ascot victory, said: “We have hit the crossbar a couple of times this week, but I was quietly confident with this horse. I just loved Creative Force at Newbury. You go back through his form and he has beaten two subsequent Royal Ascot winners. It was difficult for William as Creative Force and Naval Crown were priced up as joint-favourites earlier this week. It was a big choice and it worked out for me today.

“Creative Force went through the ground, no problem. The draw was the only slight worry, especially with the lack of pace around us. I was hoping Richard Kingscote would lead our group, but he wanted to take a lead, so I thought we could be in trouble. But he’s a brave horse, he did it all by himself from two and a half furlongs, with no targets to follow, so full credit to him.

“I just could have done with more targets really, but obviously the field split into two groups. I kind of was trying to keep an eye on what the guys were doing on the stands’ side, but it’s not easy because it can muck things up a little bit. We just had to be a bit brave and mindful of the trip, obviously, but his dam stayed alright.

“Full credit to Charlie, I can’t thank him enough. All his team have done a fantastic job and it’s nice for us to have winners at these meetings.”

Click here for an audio interview with Charlie Appleby: